skip to main | skip to sidebar

Whats up guys. Sorry for the late update. Been extremely busy lately. Just came back from Johor Bahru two days ago, rather boring, angpaus and food are the most exciting part, spent most of the time slacking.

As you all know the economy is facing a recession now, this ultimately caused my total angpau money to reduce by...... HALF!! >.< Wth. But its ok, i can double that sum by gambling ^^

So I went to benwei's house yesterday. Did nth much, except gambling^^, won 10 bucks, hell yeah! After having lunch at ou, went straight to relative's house. Also gambling and beer^^, won another 5 bucks there. Lol (You guys must hate me so much now). Last stop, weinee's house. Had a gathering with group of friends. For the first time i saw weinee do house chores. Lol. Learnt how to play mahjung. Its fun. But of course its more fun with money. Thats the only thing new that i encounter so far this year... Besides that, nth much. Back to gambling and beer^^. Won 5 bucks in one single round of black jack! broke my previous record of 3. Won 13 in total. (:


Finally I can have a rest now and do my homework, haven't touched it since the start of the holidays... The holidays have arrived! Woohoo! Finally i can get some rest. My schedule has been so hactic lately, finally get to play badminton tomorrow after 1 month without playing (it may not seem like a long time to you guys but for a badminton pro like me *hidung tinggi* it is)


Well i'm going to be very busy these few days because its ChiNEEESSEE New Year. This would really help me financially because i'm totally broke... spent to much on last year's school holidays.


So i hope i will enjoy new year, and i hope you guys would enjoy yours too. Hope you get lots and lots of angpau ($$$)!!

21... the age when we become adults, get more freedom, and most of all... LEGAL AGE FOR DRINKING ALCOHOL. Theres so many new things that we are able to do at 21. drinking...voting for a new government...JOINING THE AMAZING RACE, yeah babe. *sigh* sadly its yet to happen in 5 more challenging, thrilling years, i hope. I'm sure you are wondering why am i talking about this right now, well so do i. I don't know, it just suddenly come through my mind. Maybe its because of sam's speech about Time Quadrants in english period, telling us how to manage time, and our future more efficiently. That was quite a speech. Honestly i think he has potential to become a good public speaker. A weird thing happened today.

She really has to find a new way to scold students. Lolz

Hey guys. this is my new blog. As you can see its very empty. Still working on it, so give me time. Will update soon.
Posted by Ken at 5:18 PM No comments:

Ken
He is the one with his ass on the floor. Living his life to the fullest. Turning sixteen on the 23rd of july. Loves badminton, football. Hanging out with friends. 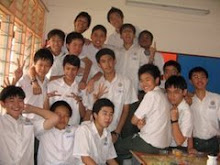